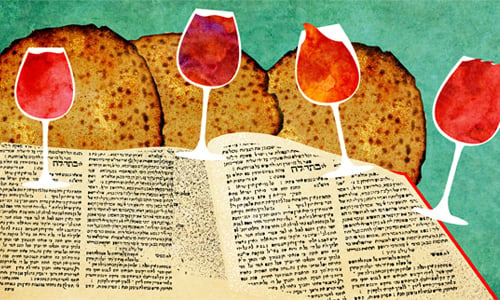 Rosh Hashanah is the birthday of the universe, the day Gâd created Adam and Eve, and it’s celebrated as the head of the Jewish year. It begins at sundown on the eve of Tishrei 1 (Sept. 25, 2022) and ends after nightfall on Tishrei 2 (Sept. 27, 2022).

The central observance of Rosh Hashanah is blowing the shofar (ram’s horn) on both mornings of the holiday (except on Shabbat), which is normally done in synagogue as part of the day’s services.

Rosh Hashanah feasts traditionally include round challah bread (studded with raisins) and apples dipped in honey, as well as other foods that symbolize our wishes for a sweet year.

Other Rosh Hashanah observances include candle lighting in the evenings and desisting from creative work.

Together with Yom Kippur (which follows 10 days later), it is part of the Yamim Nora'im (Days of Awe, or High Holidays).

The Jewish New Year, Rosh Hashanah actually means “Head of the Year.” Just like the head controls the body, our actions on Rosh Hashanah have a tremendous impact on the rest of the year.

As we read in the Rosh Hashanah prayers, each year on this day “all inhabitants of the world pass before Gâd like a flock of sheep,” and it is decreed in the heavenly court “who shall live, and who shall die ... who shall be impoverished and who shall be enriched; who shall fall and who shall rise.”

It is a day of prayer, a time to ask the Almighty to grant us a year of peace, prosperity and blessing. But it is also a joyous day when we proclaim Gâd King of the Universe. The Kabbalists teach that the continued existence of the universe depends on Gâd’s desire for a world, a desire that is renewed when we accept His kingship anew each year on Rosh Hashanah. 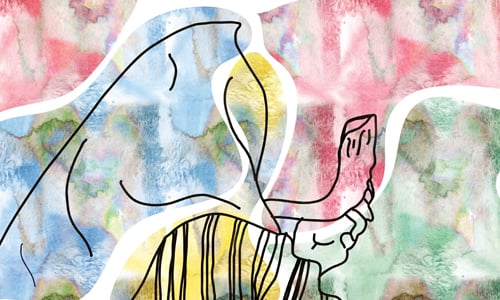 The central observance of Rosh Hashanah is the sounding of the shofar, the ram’s horn, on both days of the holiday (except if the first day is Shabbat, in which case we blow the shofar only on the second day).

The first 30 blasts of the shofar are blown following the Torah reading during morning services, and as many as 70 additional are blown during (and immediately after) the Musaf service, adding up to 100 blasts over the course of the Rosh Hashanah morning services (some communities sound another round of 30 blasts after services as well).

The blowing of the shofar represents the trumpet blast that is sounded at a king’s coronation. Its plaintive cry also serves as a call to repentance. The shofar itself recalls the Binding of Isaac, an event that occurred on Rosh Hashanah in which a ram took Isaac’s place as an offering to Gâd. 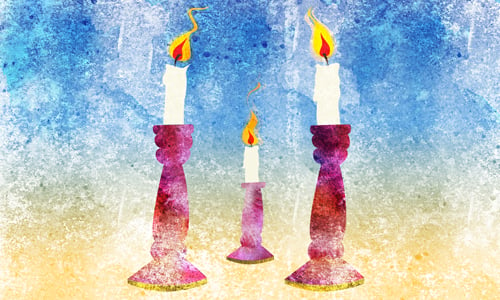 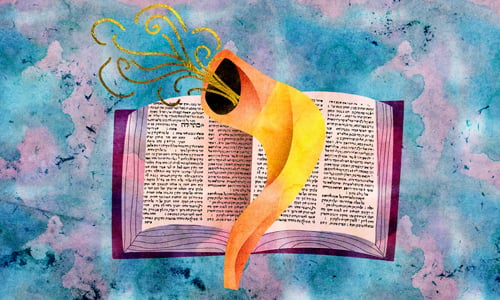 Much of the day is spent in synagogue, where we pray that Gâd grant all of His creations a sweet new year. The evening and afternoon prayers are similar to the prayers said on a regular holiday. However, the morning services are significantly longer.

The holiday prayerbook—called a machzor—contains all the prayers and Torah readings for the entire day. The most significant addition is the shofar blowing ceremony. However, there are also other important elements of the prayer service that are unique to Rosh Hashanah.

The Torah is read on both mornings of Rosh Hashanah.

On the first day, we read about Isaac’s birth and the subsequent banishment of Hagar and Ishmael.  Appropriately, the reading is followed by a haftarah reading about the birth of Samuel the Prophet.  Both readings contain the theme of prayers for children being answered, and both of these births took place on Rosh Hashanah.

On the second morning, we read about Abraham’s near-sacrifice of his son Isaac.  As mentioned above, the shofar blowing recalls the ram, which figures prominently in this story as a powerful display of Abraham’s devotion to Gâd that has characterized His children ever since. The haftarah tells of Gâd’s eternal love for His people.

The cantor’s repetition of the Amidah (Silent Prayer) is peppered with piyyutim, poetic prayers that express our prayerful wishes for the year and other themes of the day. For certain selections, those deemed especially powerful, the ark is opened. Many of these additions are meant to be said responsively, as a joint effort between the prayer leader and the congregation.

Even without the added piyyutim, the Rosh Hashanah Musaf prayer is significantly longer than it is the rest of the year. This is because its single middle blessing is divided into three additional blessings, each focusing on another one of the holiday’s main themes: Gâd’s kingship, our wish that He “remember” us for the good, and the shofar. Each blessing contains a collage of Biblical verses that express its theme, and is then followed by a round of shofar blowing. 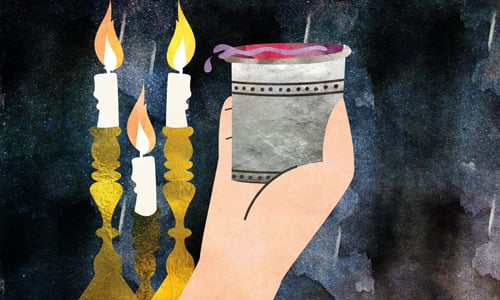 We eat festive meals every night and day of the holiday. Like all other holiday meals, we begin by reciting kiddush over wine and then say the blessing over bread. But there are some important differences:

a. The bread (traditionally baked into round challah loaves, and often sprinkled with raisins) is dipped into honey instead of salt, expressing our wish for a sweet year. We do this on Rosh Hashanah, Shabbat Shuvah (the Shabbat before Yom Kippur), in the pre-Yom Kippur meal and during Sukkot.

b. Furthering the sweet theme, it is traditional to begin the meal on the first night with slices of apple dipped in honey. Before eating the apple, we make the ha’eitz blessing and then say, “May it be Your will to renew for us a good and sweet year.”

c. Many people eat parts of the head of a fish or a ram, expressing the wish that “we be a head and not a tail.”

d. In many communities, there are additional traditional foods eaten, each symbolizing a wish for the coming year. Many eat pomegranates, giving voice to a wish that “our merits be many like the [seeds of the] pomegranate.” Another common food is tzimmes, a sweet carrot-based dish eaten because of its Yiddish name, merren, which means both “carrot” and “increase,” symbolizing a wish for a year of abundance.

e. It is traditional to avoid nuts (here’s why) as well as vinegar-based, sharp foods, most notably the horseradish traditionally eaten with gefilte fish, since we don’t want a bitter year.

f. On the second night of the holiday, we do not eat the apples, fish heads, pomegranates, etc. However, before we break bread (and dip it in honey), we eat a “new fruit,” something we have not tasted since the last time it was in season. 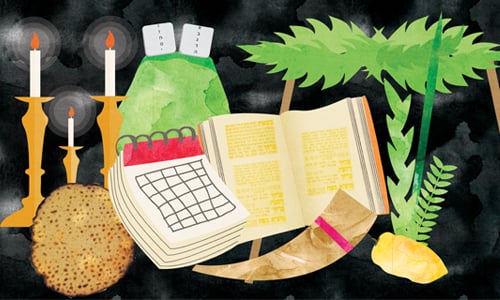 Rosh Hashanah is the start of the Yamim Nora’im (High Holidays). The holy day of Yom Kippur when we gather in synagogue for 25 hours of fasting, prayer and inspiration, is just a week later. The days in between (known as the 10 Days of Repentance, or the Ten Days of Return) are an especially propitious time for teshuvah, returning to Gâd. Yom Kippur is followed by the joyous holidays of Sukkot and Simchat Torah.

The season of the High Holidays is a time for an epic journey for the soul, and Rosh Hashanah is where it all begins.

A beneficiary agency of